48 photos
The Breakfast Club(The Ultimate 80s tribute band) rocked the Lincoln Theatre in Raleigh, NC on August 29, 2015. This was one killer show.

Full disclosure: I was in high school and college in the 80s so the songs they played were right in my wheel house. Heck, any band that plays both Van Halen and Men at Work in the same set as well as many other all genre "one-hit wonder" 80s tunes is cool in my book. I could remember the music and words to most of the songs in their sets. Apparently, everyone in the house did also. Also, I saw many people that were probably born in the 80s or later getting their groove on. No sampling and no lip syncing! The way music should be! Great night! Great band!

If this band comes anywhere near you, you need to catch the party. Become a Breakfast Club fan check out http://thebreakfastclub.com/ - 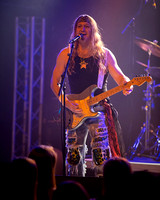